In my last post, I talked about the failed book that I quit after 4 years of writing, rewriting, and editing. When I wrote that post, I was still reeling from the experience of crashing and burning on such a long project. However, I said that I would get up again, and I have.

And the experience has been fantastic.

Sometimes, one must hit a kind of rock bottom before gaining a moment of clarity. Looking back on my pre-crash, I can see how tied up I’d become in writing the "right" way. Although writing, like any art, is full of guidelines, I began to see those guidelines as rules. This, of course, can have two effects. One, it can aid in writing more clearly (and it did), but it can also constrict creativity until it chokes.

A typical discussion in my brain:

“I want to write this scene this way but I can’t because rule 786 of How to Write the Masterpiece That Will Make You Instantly Rich and Famous by Billy-Bob McHack says that you can’t structure a scene this way. So I’ll have to write it another way, even though I won't like it.”

Yup. After 17 years of writing, I got caught in that terribly destructive mindset.

So my book crashed, and I crashed. 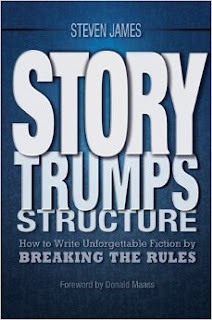 But then two amazing things happened. One, I read “Story Trumps Structure” by Steven James. This book emphasizes writing from the gut and following the logical path of your characters. Which is interesting, because that's how I had finished Gasher Creek in the first place (and then dismissed that method as too simplistic. Yarg.).

Second, I read The Great Gatsby by F. Scott Fitzgerald. I’ve read it before, but that was back in high school when my head was stuffed full of study points and suffocating symbolism (West Egg means birth, Gatsby is God or Hamlet or capitalism, etc.). As a result, I couldn't just enjoy it as a reader.

So, I re-read it a couple months ago, and it was a revelation. Not only because it's brilliant and deserves all the kudos it gets, but because it represents an era in fiction when writers were unafraid to experiment with form, structure, character, and dialogue. Gatsby is fast, fun, dizzy, and it somehow flows beautifully despite being written half a century before all those how-to writing books enlightened us on the "proper" way to write.

So how did Fitzgerald do it? He wrote from the gut (and, apparently, the liver), following the logical flow of his characters and refusing to constrict his own creativity. Because of that, he crafted something that still resonates and still reads as remarkably modern.

Although I don't fancy myself as brilliant or talented as Fitzgerald, his example has given me the courage to apply a new writing style to my fiction, a style I had worked on in the summer of 2014.

Because of this, I've never had so much fun writing. That youthful energy, the energy I had before trying to become an “expert” at this stuff, is back. Since my August crash, I’ve written the second draft to a new western, and I’ve nearly finished the first draft of a new YA sci-fi adventure series. And both are going remarkably well.

Have I abandoned all I’ve learned from those how-to writing books? Oh heck no. I still believe that structure is important, and the lessons I’ve learned from Stephen King (On Writing) Ray Bradbury (Zen in the Art of Writing), Rebecca McLanahan (Word Painting) and Renni Browne and Dave King (Self-Editing for Fiction Writers) have been invaluable.

Guidelines are important, and they must be studied (especially grammar). But it’s also okay to bend those guidelines. Or, on occasion, break them.

So what do I call myself now? I no longer think of myself as a pantser. After all, I do follow a loose structure. Nor am I a plotter, as that's too constricting. I suppose I’m some strange hybrid of the two. Maybe … a plantser? I suppose that could work, although it sounds like the name of a poorly-conceived comic supervillain who's trying to destroy Metropolis with radioactive tulips.

Whatever the label, it seems to work, and as long as I’m having fun, that’s all that matters.

2016 is going to be an awesome year. I should have two new novels out this year, and I may re-work a few old projects as well. If I can update them to my new style, they may see the light of day.

For those who have asked about a sequel to Gasher Creek: the answer is yes, there will be a sequel (and possible prequel) coming out in the next couple years. But a few other characters are looking for the opportunity to breathe first.

For those who have asked about the podcast, yes, I'm still planning a podcast. But I want a new book to promote on the first episode, so that's where the delay is coming from. That "new book" was supposed to be the one that crashed back in August. But that's okay. I have a better book to promote, and I think it's worth the wait.

Yikes, I have a  lot of work to do. Better get started!